Our Faith can move Mountains Matthew 17:20

Worship and Our Church Background Information about our Church

St Stephen's Church was founded in 1870 and was the vision of Harrison Blair who owned the local chemical works. He died in 1871 before the building was completed. The graveyard holds the remains of 19 miners who were killed in the Unity Brook Colliery disaster.

We are a Voluntary Aided Church School. What does that mean?

As a church school, we have a strong Christian ethos and pride ourselves in the fact that we educate our children in a Christian way of life, upholding Christian values.

Worship in School and Church

Assemblies take place in the school hall on Monday, Wednesday and Thursday mornings before lessons. There is Singing Worship for all children on Tuesdays. On Fridays we celebrate children's achievements in a special assembly to which we invite parents and carers. We take all children to church once a month for worship where we take communion, sing and pray together.  The services are led by Reverend Kim Lafferty.
We also celebrate important Christian festivals, such as Easter, Harvest and Christmas in church with parents, friends and relatives.

Sunday services are held at the following times: 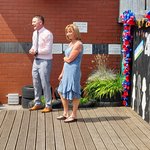 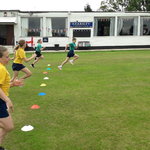